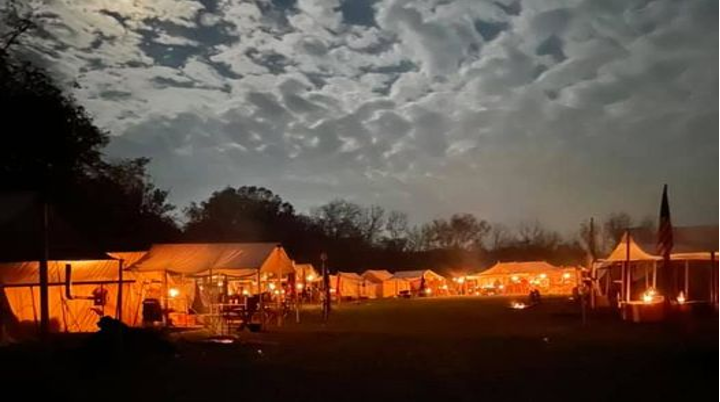 The George Washington Chapter hosted the Colonial Territory (aka Northeast Region) bi-annual Rendezvous at Camp Berry, Honey Grove, PA, on the 14th through the 17th of October 2021.

We had the honor of having the National FCF Coordinator, John Hembree, as the speaker for the Rendezvous. John brought messages the Council Fires on Friday and Saturday evenings as well as our Sunday morning service.

For several of the members of the George Washington Chapter, this was a very memorable event. There were new members welcomed into the Fellowship, several advanced to Bucksin and Wilderness level.

Wilderness – Of the nine candidates, eight were from the George Washington Chapter. They included Steve Steffel, Ken Carfagno, Kenny Carfagno, JJ Wickard, Trent Wickard, Riley Heller, Andrew Buckman and Joel Parthemore. You might notice that there were two fathers & son pairs taking this step together.

Buckskin – There were 5, all from our Chapter: Colin Scott, Wyatt Garret, Jadon Culp, Emmanuel Illgenfritz and Jeremy Shuey.

Frontiersman – There were 9 new Frontiersmen. Tuwa Lopez-Shuey and Chris Hamm were the only two from our Chapter that I am sure completed the Adventure. If I missed anyone, I apologize will update as necessary.

Congratulations to all of the above.

The selection of a new National Scout and Territorial Scout was due at the Territorial Rendezvous. Kenny Carfagno from Outpost 234, Family Worship Center, Lansdale, PA, was selected as the young man representing the Colonial Territory as National Scout 2021-2023. Well Done, Kenny!

There was a surprise award presented to Mark Lance. He was awarded the FCF Outstanding Service Award. Mark has been the President of the George Washington Chapter for 19 years and has dedicated a great deal of time and effort to the Royal Ranger and FCF programs. This is award was well deserved.

There were items from the Wilderness candidates demonstrating their chosen craft and articles submitted for judging in the craft fare event. These items were auctioned off and raised $3150 for missions. This year’s mission project was sponsoring Convoy of Hope.